CoinTrackers.com estimates the value of a 1971 Kennedy Half Dollar in average condition to be worth 60 cents, while one in mint state could be valued around $45.00. - Last updated: August, 30 2022 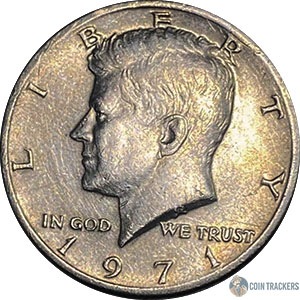 This was the first year that the US Mint issued Kennedy Half Dollars in a non silver state. Anything after 1970 contains no silver, with the exception of errors listed below. These coins are a copper-nickel composition, being a nickel jacket over a copper core. Errors include obverse die breaks, struck on nickel planchet, struck on quarter planchet, off center strikes up to 70%, double strikes, struck on silver planchet, and clipped planchets. 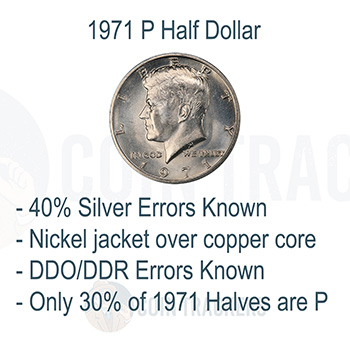 1971 was apparently a rough year for the United States mint. This was the year the mint switched from 40% silver to a blend of 91.67% Copper 8.33% Nickel. This new blend required new planchets to be created, and because of this there are many instances of Half Dollars from 1971 being struck on the wrong planchet. 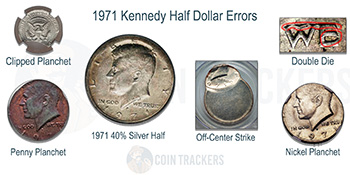 Here are just a few of the main errors that can be found sorting through half dollars. 1971 Half Dollar Struck on Nickel Planchet - one of the many instances of the mint using the wrong plachets. The edge of the coins are not reeded, instead the edge is smooth like a nickel. A large portion of the coin will also appear to be missing, due to the fact that nickel diameters are not as wide.


40% Silver 1971 Half Dollar - Yes 1971 Half Dollars made from 40% silver are a thing. They are however not meant to be. 40% silver 1971 halves are created when left over planchets from 1970 were used to create 1971 50C pieces. These coins are rare and sell for thousands of dollars when certified. The 1971 Half Dollar struck on silver planchet means there are instances of this coin accidentally minted in silver. If you think your 1971 Kennedy Half is silver look at the reeded edges, if there is a copper ring dead center this coin is not silver. Silver coins wont have rings of copper in the center as they are not sandwiched.


Struck on Silver Quarter Error - is yet another planchet error. Silver quarter planchets struck by 1971 Half Dollar dies created this error. Again a large portion of the coin will appear to be missing as the planchet diameter is too small to display the entire half dollar design.


Struck on Non Silver Quarter Planchet -similar to the error above, just struck on a non silver clad quarter instead.


DDO / DDR Double Die - When the die strikes the planchet 2 or more times a double or even triple die error occurs. Double Die Obverse (front) and Double Die Reverse (back) are common this year as well. Double Die errors can be hard to spot when searching for coin errors. Try looking at the fine details of numbers, letters, and mint marks. If you see a tiny portion of the lettering repeated under, above, or next to anything this is likely a Double Die strike error.


Struck on Penny 1C Planchet - Red or brown in color instances of 1971 Halves struck on 1c penny planchets are indeed an error. They are smaller and thinner than the non error counterparts. A major portion of the coins will also be missing due to the fact that pennies don't have the same diameter as half dollars.


1971 Clipped Planchet 50C - When a round die clips the edge of a coin it will create a cookie cutter appearance on the edge of the coin. In other words a portion of the half dollar in the shape of a crescent will be missing.


Breakdown of pricing per condition for 1971 Kennedy Half Dollar as follows.

How much is a 1971 Kennedy Half Dollar worth? 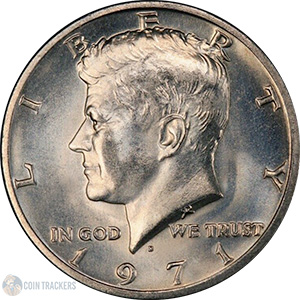