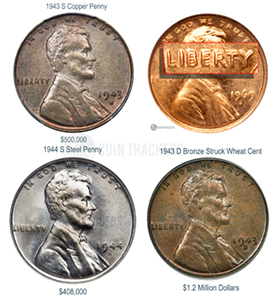 Looking to make a profit coin roll hunting? If so, the modern United States cent is one of the best places to start looking. We've compiled a list (with ref pictures) of the most valuable Lincoln penny errors that are in regular everyday circulation. Many numismatics spend their spare time searching boxes of pennies to earn a extra cash. If you know what to look for, this hobby could pay serious dividends. The initial cost to get started is just $25.00 and your time. With $25 you can buy a box of penny rolls to search through in between episodes of your favorite tv shows.

What penny errors should I be looking for? The list below details by far the most valuable cents released into the United States monetary supply from 1900 to 2020.

If you enjoy this article please be sure to share on your favorite social media platform.

In 1943 the United States switched all pennies to 2.702 g zinc coated steel planchets. These were steel planchets that were coated in a layer of zinc to improve their luster. Just a few leftover copper penny planchets from the early 1940s were “accidentally” used to create 1943 Copper Pennies. Of the many variations D, S, P the Denver minted ones is possibly the rarest, and has as recently as 2021 sold for $840,000.00. If you want this coin be prepared to shell out $1.2 million as that is the current asking price.

The 1943 D Copper / Bronze penny has been deemed the Holy Grail of penny errors. This wheat cent is the only example known to exist. If you happen to find one it could be worth 1 Million, and possibly even more.

Why is this coin so rare? In 1943 copper was being used heavily to create casings for ammunition. Most ammunition consists of a copper or brass (copper/zinc) casing, filled with gunpowder, and capped with a lead, copper or steel bullet. Think of how much ammunition was needed during world war three, and then you can begin to understand why the US Mint switched from copper to steel planchets.

The odds of finding a 1943 D Penny struck on a bronze planchet is likely around 10 in 217 million.

Good news however. As these anomalies have become more known, more and more specimens have come to light.

1943 Struck on Bronze Planchets are cleanly struck and likely in great condition. Steel cents require greater force when struck by dies. Because of the increased pressure bronze examples of the 1943 Cent should in general be in better condition than most copper pennies from the 1940's.

This error is similar to the 1943 D Struck on Bronze Planchet, there are however more specimens with the S mint mark. Because these are more plentiful than the D version of this error, coin grade or condition is much more important. The standard for the 1940 era would be something akin to a MS-65 RD. There have been to our knowledge no coins in this condition and color found. The best known specimen as of late is an MS63 Brown (BN) and it has sold for more than $500,000.

Most recent sales of the 1943 Copper Penny. These are in order with the newest being on top.

In 1944 all pennies were meant to be made from copper / bronze not steel. The 1944 steel wheat penny is another instance of the United States Mint using the wrong planchet. Leftover steel planchets from 1943 Steel War Cents were left in bins and mixed with 1944 Copper Penny Planchets. These planchets were then fed into the machines and struck by the die means for the 1944 copper penny, creating 1944 Steel cent errors.

If you think you might be in possession of this rare error here are the steps you should take.

A.) Carefully hold a magnet over the coin and see if you get any reaction. A zinc coated steel planchet is magnetic. It will stick to a magnet. Be careful not to scratch the coin however. Even the smallest abrasions can affect the coin's value.

B.) If the coin does stick to a magnet it will need to be certified. Contact your preferred coin grading company and find out the safest way to send the coin their way, being sure to insure the specimen.

Most recent sales of the 1944 Zinc coated steel penny sales. These are in order with the newest being on top.

Extra notes: 1944 steel cents should technically be a weaker strike than 1943 steel cents. The force needed to create a copper penny is less than that needed to create a steel penny. The machines from 1944 should have been dialed back from 1943 in an effort to preserve the dies longevity. This is just speculation from CoinTrackers.com