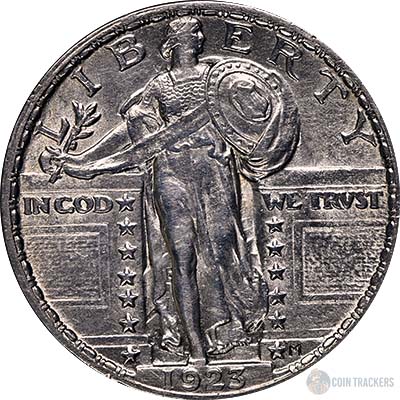 The Standing Liberty Quarter Dollars were fairly popular, but only issued between 1916 and 1930. These excelent coins were minted in 90% silver and the current melt value is $3.79, this number is based off current spot price and silver content. The melt value of $3.79 is updated every 15 minutes (when the markets are open Mon-Fri).

The Liberty quarters were designed by Hermon A. MacNeil in 1916 and then redesigned in 1917 with a few cosmetic changes. The Bald Eagle is on the reverse and there are NO stars under the eagle during 1916 and part of 1917. When the coin was redesigned the eagle was moved up slightly and 3 stars were placed below it.

These coins were minted at the Philadelphia, Denver, and the San Francisco mint. Some proofs were issued as well.

Finding one of these in BU or similar condition is a tuff thing to do, unless you are willing to she'll out some decent money.