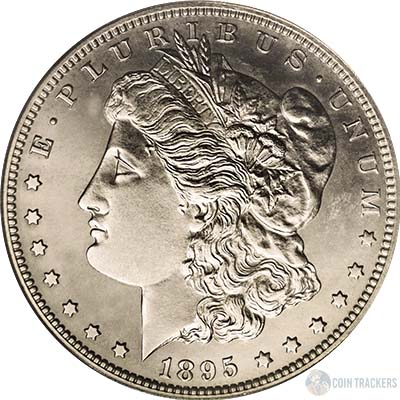 The Morgan Silver dollars represent the best in silver coin manufacturing at its time. It's the most valuable of the silver coins the United States has minted in the late 1800's and early 1900's partly because of it's size, and silver content.

This is not a coin you want to carry around in your pocket. At near 27 grams and an inch and a half in diameter this baby is large and heavy by modern day coin standards.

The Morgan Dollar is minted in 90% silver and 10% copper. This means the coin is worth $16.1 based off its silver content alone. Bookmark this page (Ctrl+D) and come back to get the current melt value for this coin. It's updated every 15 minutes.

These coins were minted from 1878-1904 and then in 1921. The original design was for that of a half dollar. In order to mint the coin on the Dollar the die needed to be larger and the words half dollar were replaced with "one dollar".

The coin was originally designed by George T. Morgan, and thus the name Morgan Dollars.

The Morgan was the first silver dollar that was minted after the demonetization of silver set by congress in the Coinage Act of 1873.

All US Dollar Coins