CoinTrackers.com estimates the value of a 1974 Kennedy Half Dollar in average condition to be worth 50 cents, while one in mint state could be valued around $2.50. - Last updated: October, 03 2022 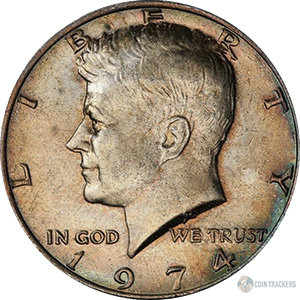 These coins have 0% Silver content, but they are popular with the collectors.


The year 1974 saw the United States mint in San Francisco, Philadelphia, and Denver create Kennedy Half Dollars. Those issued at the Denver and Philadelphia mint appear to be selling for between $1.50 and $3.00, while the San Francisco specimens tend to sell for $3 to $9 for the proof. Silver Proof 1974 Half Dollars were minted but these only came from the mint as a special order.

In terms of errors 1974 really doesn't have any standouts to be aware of. All the normal errors are there however. The DDO's and DDR's (Double Die Obverse and Reverse), as well as clipped planchet errors. It seems however all the planchet errors that were originally seen with the changeover from silver to copper / nickel planchets in 1971 have resolved themselves. 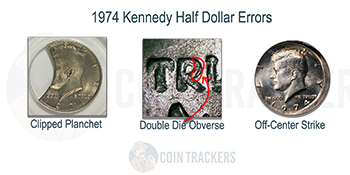 The most common half dollar errors to be found in the year 1974 are;

1974 Clipped Planchet 50C - When a round die clips the edge of a coin it will create a cookie cutter appearance on the edge of the coin. In other words a portion of the half dollar in the shape of a crescent will be missing.


1974 Off Center Strike - When the die strikes an improperly seated plachet off-center this is the error it creates. Strikes can be anywhere from 5% to 95% off center. The more off center the more of the blank planchet will be left behind.


1974 DDO / DDR Half Dollar - When the planchet is struck more than once on the same face by the die this causes a Double Die Error. DDO means front, DDR means Reverse.


Breakdown of pricing per condition for 1974 Kennedy Half Dollar as follows. 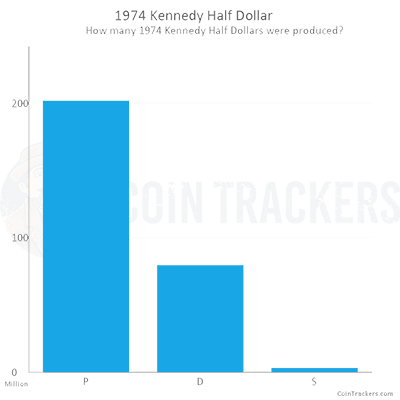 How much is a 1974 Kennedy Half Dollar worth? 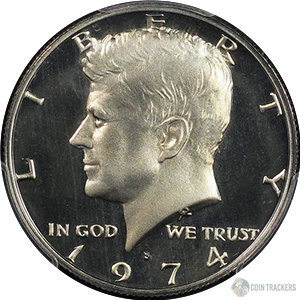 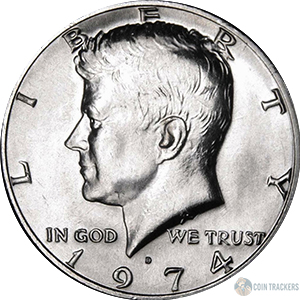