CoinTrackers.com estimates the value of a 1999 S Kennedy Half Dollar Proof in average condition to be worth 50 cents, while one in mint state could be valued around $16.00. - Last updated: June, 10 2022 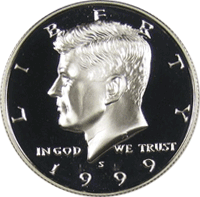 Notes: These stats are for the 1999 S Kennedy Half Dollars that are not silver proofs. 4x as many non proofs were issued than actualy silver proofs.

How much is a 1999 S Kennedy Half Dollar Proof worth? 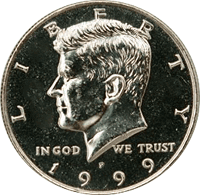