CoinTrackers.com estimates the value of a 2012 S Hawaii Volcanoes Quarter Proof in average condition to be worth $6.00, while one in mint state could be valued around $13.00. - Last updated: September, 02 2022

The 2012 Hawai'i S Volcanoes National Park Quarters (90% Silver Proofs) are the second most widely produced of the America the Beautiful Quarters for the year 2012. The coin detailed above is silver. 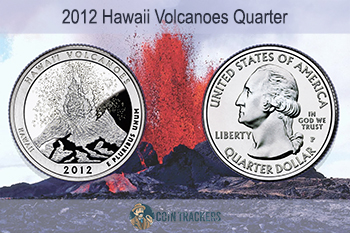 Yes! Hawaii Volcanoes Quarter's produced in 2012 are 90% silver to be precise, and contain .1808 troy oz or 5.623 grams in total of .999 pure silver. Silver weight is measured in troy ounces. Troy ounces weigh about 2 grams more than the standard ounce. CoinTrackers has built a tool that will let you know if your coin is silver or not. The tool is called Is My Coin Silver?.