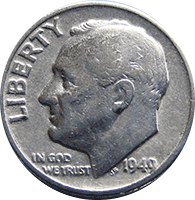 Notes: 1949 is one of the more valuable years for the 90% Silver Roosevelt Dimes.The S mint for the 1949 Roosevelt Dimes is the most sought after of the 90% 1949 Silver dimes. Its value is a good bit higher than the either the D or the P. You'll want to be on the lookout for FB or Full Bands on the reverse of the coin. If the bands on the torch are clean and clear that is considered full bands. In terms of errors there really aren't that many to be found this year. There have been a few off center strikes and not much else. There is also a 1949 penny struck on a 1949 dime planchet. This will look like a penny, have the date 1949, but have the color of a silver dime.

How much is a 1949 Roosevelt Dime worth?


If you are a fan of coin roll hunting or just want to learn more about roosevelt dimes then search or scroll below to find the most valuable and rarest in this series. 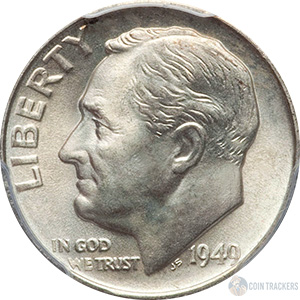 Yes! Roosevelt Dime's produced in 1949 are 90% silver to be precise, and contain .0723 troy oz or 2.248 grams in total of .999 pure silver. Silver weight is measured in troy ounces. Troy ounces weigh about 2 grams more than the standard ounce. CoinTrackers has built a tool that will let you know if your coin is silver or not. The tool is called Is My Coin Silver?.

This coin in poor condition is still worth $2.3 more than the intrinsic value from silver content of $1.7, this coin is thus more valuable to a collector than to a silver bug. Coins worth more to a collectors may be a better long term investment. If the metal prices drop you will still have a coin that a numismatic would want to buy.