CoinTrackers.com estimates the value of a 2011 S Olympic National Park Proof in average condition to be worth 40 cents, while one in mint state could be valued around $12.00. - Last updated: August, 25 2022 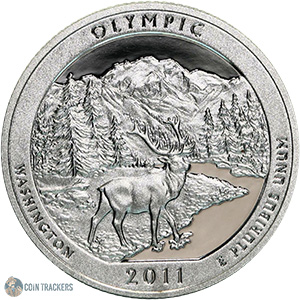 
If you are a fan of coin roll hunting or just want to learn more about Olympic National Parks then search or scroll below to find the most valuable and rarest in this series. 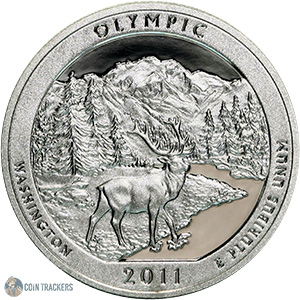 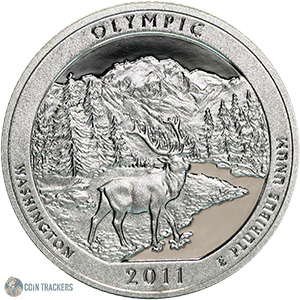 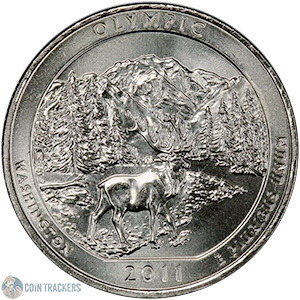 The most valuable Olympic National Park's. Prices listed are for MS-65 certified. Visit the link to learn more about each coin.

The rarest and hardest to find Olympic National Park's Check out each link to learn more about each coin.

What is the rarest Olympic National Park?

Yes! Olympic National Park's produced in 2011 are 90% silver to be precise, and contain .1808 troy oz or 5.623 grams in total of .999 pure silver. Silver weight is measured in troy ounces. Troy ounces weigh about 2 grams more than the standard ounce. CoinTrackers has built a tool that will let you know if your coin is silver or not. The tool is called Is My Coin Silver?.


Coinage issued in 2011 will only contain silver if minted as a silver proof. Is your coin a silver proof or just a proof? Do they weigh more than other identical coins from the same year? If so they are likely 90% silver. 90% silver coins are much denser than the modern 90% copper 10% nickel blend the mint uses today.

This coin in poor condition is worth $3.93 less than the intrinsic value from silver content of $4.33, this coin is thus more valuable to a silver bug than to a coin collector. You will most likely find however that it is hard to get a coin for less than spot price. At least that has been our experience. Want more info? Then read Coin Collecting Investment an article that details the benifits of coin collecting as a way to build wealth..