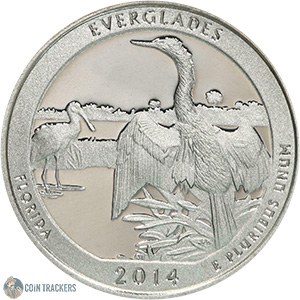 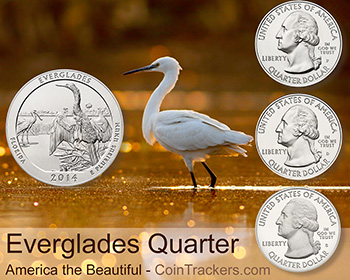 The Florida Everglades National Park Quarter was released in 2014 and was designed by Joseph Menna and Joel Iskowitz. The initials on the reverse of JI, and JFH belong to them. Inscribed on the quarters reverse is Everglades, Florida, E Pluribus Unum, and the year 2014 Two anhingas also known as snakebirds or water turkey are present as well.

Florida Everglades National Park covers some 1.5 million acres of wetlands, and a total of 2,357 square miles are preserved. Learn more about the everglades here.


If you are a fan of coin roll hunting or just want to learn more about Everglades National Park Quarters then search or scroll below to find the most valuable and rarest in this series. 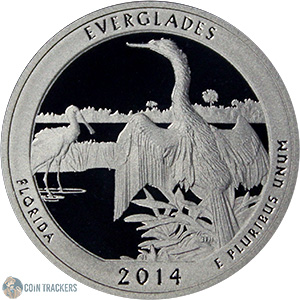 The most valuable Everglades National Park Quarter's. Prices listed are for MS-65 certified. Visit the link to learn more about each coin.

The rarest and hardest to find Everglades National Park Quarter's Check out each link to learn more about each coin.

What is the rarest Everglades National Park Quarter?

Yes! Everglades National Park Quarter's produced in 2014 are 99% silver to be precise, and contain 5 troy oz or 155.5 grams in total of .999 pure silver. Silver weight is measured in troy ounces. Troy ounces weigh about 2 grams more than the standard ounce. CoinTrackers has built a tool that will let you know if your coin is silver or not. The tool is called Is My Coin Silver?.


Coinage issued in 2014 will only contain silver if minted as a silver proof. Is your coin a silver proof or just a proof? Do they weigh more than other identical coins from the same year? If so they are likely 90% silver. 90% silver coins are much denser than the modern 90% copper 10% nickel blend the mint uses today.

This coin in poor condition is still worth $30.2 more than the intrinsic value from silver content of $119.8, this coin is thus more valuable to a collector than to a silver bug. Coins worth more to a collectors may be a better long term investment. If the metal prices drop you will still have a coin that a numismatic would want to buy.