CoinTrackers.com estimates the value of a 2015 P Kisatchie Louisiana Quarter in average condition to be worth 35 cents, while one in mint state could be valued around $2.25. - Last updated: September, 16 2022 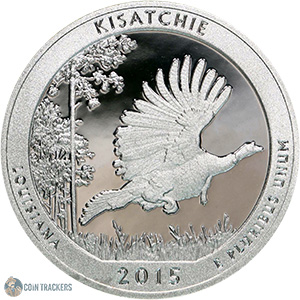 The Kisatchie Louisiana National Forest Quarter was minted in 2015 at the Philadelphia (P), Denver (D), and San Francisco (S) mints. This coin is part of the America the Beautiful coin series that was to showcase some of the most beautiful natural landscapes the United States has to offer. President Herbert Hoover. Created Kisatchie National Forest which protects more than 600,000 acres of public lands. 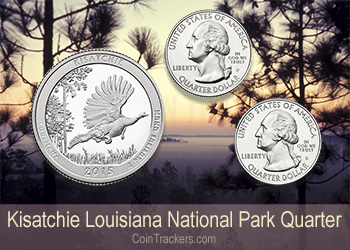 The obverse or front of this coin is no different than any other Washington Quarter of its time, with George Washington's bust the words United States of America, In God We Trust, Liberty, and Quarter Dollar. The coin's reverse was designed by sculptor Joseph Menna, and designer Susan Gamble. A male wild turkey in flight. Male wild turkeys have so called beards that hang like tassels from their neck. The date 2015 is present on the bottom. The words Kisatchie Louisiana, and E Pluribus Unum as well. Kisatchie is what the native Kichai Indians called themselves. Long leaf pine trees, and bluegrass are the native vegetation represented here.


If you are a fan of coin roll hunting or just want to learn more about Kisatchie Louisiana Quarters then search or scroll below to find the most valuable and rarest in this series. 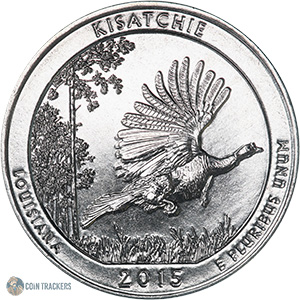 The most valuable Kisatchie Louisiana Quarter's. Prices listed are for MS-65 certified. Visit the link to learn more about each coin.

The rarest and hardest to find Kisatchie Louisiana Quarter's Check out each link to learn more about each coin.

What is the rarest Kisatchie Louisiana Quarter?

Yes! Kisatchie Louisiana Quarter's produced in 2015 are 99% silver to be precise, and contain 5 troy oz or 155.5 grams in total of .999 pure silver. Silver weight is measured in troy ounces. Troy ounces weigh about 2 grams more than the standard ounce. CoinTrackers has built a tool that will let you know if your coin is silver or not. The tool is called Is My Coin Silver?.

This coin in poor condition is worth $103.2 less than the intrinsic value from silver content of $103.55, this coin is thus more valuable to a silver bug than to a coin collector. You will most likely find however that it is hard to get a coin for less than spot price. At least that has been our experience. Want more info? Then read Coin Collecting Investment an article that details the benifits of coin collecting as a way to build wealth..